In this post I want to talk a bit about one of my assignments from my MSc.

One of the modules that I am studying is the analysis of networks & graph theory. It’s a fascinating subject with a variety of applications (e.g. viral marketing, studying epidemics, and web search) and a whole range of interesting algorithms and techniques that can be applied. This post will cover just one of them: Dijkstra’s algorithm for finding paths.

A brief introduction to networks

A network is quite a simple thing really, it’s a collection of nodes (sometimes called vertices), connected by paths (edges). A bit like this graph representing which characters know each other in the Batman universe (here the ‘nodes’ are characters and the ‘edges’ are the links between them):

One thing that can be important in analysing a network is finding a path through the network from one node to another. If the network was of say train stations (with the edges being connections between stations) then finding the path is analogous to planning a journey on the network.

But not all connections are made equally, sometimes there might be some restrictions on which paths can be taken, or some cost associated with taking a path. In the train example this might be indicative of journey time. Bringing this back to the network structure, each edge in the network is assigned a “weight” or “cost” that is indicative of how much energy/time is required to use that edge.

When we look for the “shortest path” between two nodes in a network, we use the weights on the edges that connect those two nodes. For example in the graph below, the shortest path from node 1 to node 6 is from node 1 to 5 to 4 to 6, with a total weight of 13. 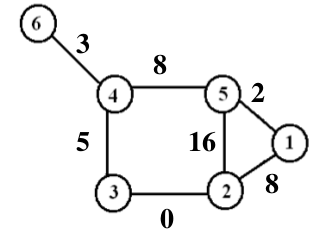 This path can be found using Dijkstra’s algorithm (which is what my assignment was).

Dijkstra’s algorithm is really quite simple, but it can be a bit tricky to get your head around. I found this page from the University of Auckland really helpful in improving my understanding of it.

The algorithm uses the concept of a temporary and permanent label for each node. When the algorithm begins, all nodes have a temporary label representing their distance from the starting node. A typical value to initialise these labels to is infinity (or some other very large number). This represents the fact that the algorithm doesn’t know any of the distances yet. As the algorithm progresses, these labels will change (as we find paths to each node) and will be made permanent.

To begin with, the algorithm labels the starting point of the path with the permanent label 0 (as the start is “0 distance” from itself) and adds it to a set of nodes for which we have found the shortest path.

It then finds all the nodes that are connected to the starting node (its ‘neighbours’) and assigns them a temporary label equal to their distance from the start node. This distance is typically the weight on the edge between the neighbour and the start node. The neighbour with the smallest temporary label (i.e. the node that is closest to the start) has its label made permanent and we add it to the set of nodes that we have a path to.

This process is then repeated for the next closest node, but now we can use both a path that is direct from the starting node to a new node, or paths that go through the node we just labelled.

This is repeated until all nodes have a permanent label, which will give the shortest path from the start to any node in the network. Along the way it also keeps track of the “predecessors” of each node. The predecessors for a node are just the other nodes that lie on the shortest path from the starting point to that node. If this still isn’t clear, I’d recommend you check out this visual walk through provided by the University of Auckland.

My assignment was to code this algorithm up in Python from scratch. This was one of my first major forays in to Python (I’ve been more of an R guy up to now) so this was challenging and required some head scratching. There are several packages that will do this for you (namely Networkx and igraph), but I had to do it by hand.

Here’s the final code snippet I wrote that implements this algorithm:

I had an awful lot of fun developing this algorithm. It was tricky at first, but once I’d got my head around what needed to be done, it was a blast. I should add that this probably isn’t the most efficient way to code this algorithm, and may not be the most “Pythonic” but it works for me and that (for now) is important.

I’d encourage anyone to have a go at implementing something similar themselves. It’s a tricky problem but you’ll get a real sense of achievement once you figure it out. Hopefully this post might help, too!

For those that are interested, you can see the full code, and grab the data for the example network I was working with from my Github repo.